Community health workers across the world currently use respiratory rate as a proxy sign for pneumonia. But this technique is far from ideal.

Literature from Ethiopia has shown that manually counting breaths per minute is challenging for three main reasons:

Pneumonia is the single leading cause of death among under-fives in Ethiopia. It is estimated to affect 3,370,000 children and kill over 40,000 under-fives every year.

So the need to find a more effective way to monitor respiratory rate, and therefore accurately diagnose pneumonia, is urgent. Too many children are dying, in Ethiopia and beyond.

The Acute Respiratory Infection Diagnostic Aid (ARIDA) project was designed to begin the journey towards finding a tool that can monitor respiratory rate more accurately.

It involved field studies of two new automated respiratory rate counting aids – and these studies involved several research stages, which were implemented by Malaria Consortium. The aim was to identify a counting aid that can be used by frontline health workers in resource-limited community settings and health facilities to classify fast breathing.

The agreement study took place at St Paul’s Hospital in Addis Ababa, in April and May 2017. It aimed to answer the question: “Does ARIDA accurately measure respiratory rate in children under 59 months in a controlled setting?”

We wanted to understand the level of agreement between the respiratory rate count on the diagnostic aid and the count of the reference standard – in this case a video expert panel.

The video panel comprised two to four independent video reviewers, all of whom were practising paediatricians with more than five years of experience. All of them had to pass a respiratory rate counting competency exercise before becoming part of the panel.

In the study, they watched 60-second videos of the child’s chest, and the mean respiratory rate between the two closest reviewers was used as the reference standard.

Results from the agreement study showed an acceptable level of performance from the ChARM device. However further performance studies are required, specifically focused on testing the performance of these types of diagnostic aids in younger children. 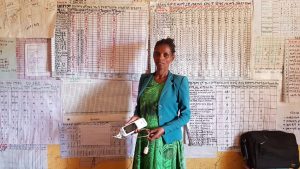 So that was the first study. The second was on usability and acceptability of the diagnostic aids – and as well as testing the two devices in Ethiopia, research was also carried out on the ChARM device in Nepal. The three studies took place between May and December 2018.

In terms of usability, we wanted to find out whether community health workers adhere to World Health Organization requirements to assess fast breathing, as well as device manufacturer instructions for use, when using the devices to assess and classify children under-five with cough and/or difficult breathing. We also tested to explore the acceptability of the ARIDA devices to community health workers, first-level health facility workers – Ethiopia only – and caregivers.

Using the ChARM and Rad-G devices, CHWs in Ethiopia were able to adhere to WHO requirements to assess fast breathing and device manufacturer instructions for use.

In terms of acceptability, frontline health workers in both countries reported that they preferred ARIDA to their standard practice device, and felt that having time to practice using the device was essential. They also felt that ARIDA had increased the credibility of the service they provide, and encouraged care seeking behaviour from their communities.

There were a few design issues that needed to be rectified, but on the whole the diagnostic aids were widely accepted.

After some initial concerns over the red light on one of the devices, caregivers in Ethiopia accepted the ARIDA devices and demanded that they should be available in future.

Further studies are needed on device performance in routine practice, specifically in younger children so that we can better assess fast-breathing in children under five at different levels of the health system.

Further large-scale implementation science studies investigating the clinical impact of these types of diagnostic aids, as well as process and costing implications, also need to be undertaken at country level before these diagnostic aids are rolled out.

Dr Kevin Baker will be presenting these findings at ASTMH 2019 on Sunday 24 November. See the schedule here.