At Malaria Consortium we continued to work towards achieving our mission throughout 2016. With the support of our donors, partners and collaborators, we helped to improve lives in Africa and Asia through sustainable, evidence-based programmes that combat targeted diseases and promote child and maternal health. See below for a few of our highlights of 2016. 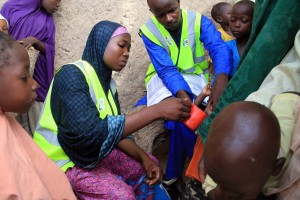 We continued to transform the malaria landscape in the Sahel through our ACCESS-SMC project that administers seasonal malaria chemoprevention. Funded by UNITAID, ACCESS-SMC treated approximately 6.4 million children during the 2016 campaign, including 88 percent of children under five years old.

The Department for International Development funded ‘Support to National Malaria Programme’ or SuNMaP concluded in 2016. This ground breaking eight-year project, led by Malaria Consortium, took an innovative approach to strengthening the country’s management of malaria at both state and federal level, harmonising intervention efforts and vastly improving demand for and access to malaria services. In addition, the project delivered millions of nets and has already saved an estimated 48,000 lives, which would have been lost to malaria.

Malaria Consortium was selected as a GiveWell top recommended charity for our expertise in delivering seasonal malaria chemoprevention (SMC). GiveWell is a world-renowned meta-NGO that recommends charities by assessing them on four criteria: effectiveness, cost-effectiveness, transparency, and room for more funding.

4) New innovations in the fight against dengue and malaria

We continued to develop and deliver innovative approaches to disease control in 2016. Most notably, our integrated vector management project, which uses larvae-eating guppy fish to reduce mosquito populations, was successful in reducing potentially dengue-carrying mosquito rates by 46 percent in Cambodia’s high risk areas. The project received wide spread recognition for being cost effective, sustainable and easy to implement, making it a suitable intervention for scale up.

In Myanmar, Malaria Consortium established an insecticide-treated clothing (ITC) project to determine the acceptability of ITC for malaria prevention among the key risk groups at the community level, such as rubber tappers. It was the first time this research had been conducted at the community level. Results showed that ITC was easy to use, durable, reduced mosquito bites and also has the potential for scale up.

Malaria Consortium supported the launch of The World Health Organization’s annual World Malaria Report in the UK at an event co-organised with Malaria No More UK, the All-Party Parliamentary Group for Malaria and Neglected Tropical Diseases, and other leading malaria NGOs. The report contained a range of achievements and detailed the progress made towards achieving the 2030 Sustainable Development Goals. These included a five-fold increase in the recommended three or more doses of preventive treatment for pregnant women and an 80 percent increase in the use of long-lasting insecticidal mosquito nets for all populations at risk of malaria.

At the report launch, the UK’s International Development Secretary, Priti Patel, reiterated the UK’s commitment to end malaria and announced an additional £75 million investment to support the development of antimalarial drugs and insecticides.

We look forward to continuing to work with all of our partners and donors throughout 2017 to improve lives and progress towards achieving the 2030 Sustainable Development Goals.