This interview was originally published on Break Dengue.

What is dengue and how does it spread?
Sergio Lopes, Malaria Consortium Cambodia Country Technical Coordinator: Dengue is a disease caused by a virus (DENV) that is transmitted through the bite of the Aedes mosquito (sometimes called Tiger mosquito due to its striped black and white appearance). Mosquitoes bite infected individuals and, when later biting another non-infected person, transmit the disease. Aedes mosquitoes have been adapting quite well to human environments, particularly cities and peri-urban environments, which has also contributed to the quick spread of dengue.

Why is dengue a priority issue?
Dr Rabindra Romauld Abeyasinghe, Coordinator, Malaria, other Vectorborne and Parasitic Diseases Unit, Division of Communicable Diseases, World Health Organization, Manila Regional Office: Dengue is a priority issue for governments in the Asia Pacific Region, as explosive outbreaks affect thousands of people. For communities dengue is a priority because of the high morbidity rates (often affecting several members of the same family) or even the loss of loved ones. Many countries in this part of the world are also concerned about the high incidence of dengue reported, because the disease affects work performance, school attendance, tourism and their economies.

Secondly, dengue has recently become a higher priority for most governments in the region, because it is transmitted by Aedes mosquitoes, the same species of Aedes mosquito that also transmits Zika virus disease and chikungunya. Therefore, the urgency to control dengue and these other diseases has become increasingly important. 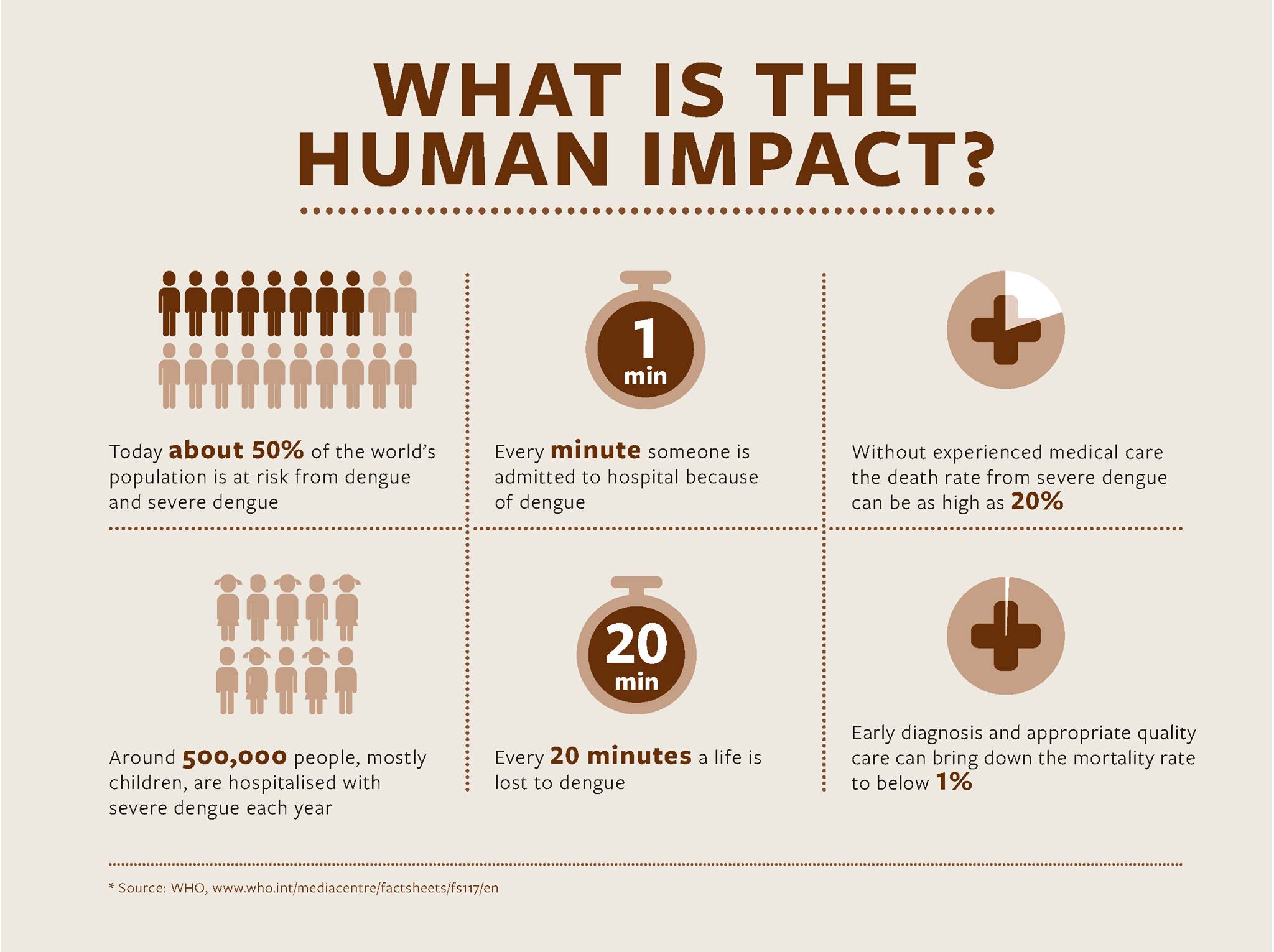 How can we prevent and treat dengue?
Dr Rabindra Romauld Abeyasinghe: Dengue is caused by four different viral serotypes, which makes it very difficult to control as a single person may experience up to four episodes of dengue during their lifetime. In addition to this, there is a lack of specific treatment and effective vaccine. The only available vaccine, which is currently registered in several countries of the region, is not 100 percent effective and requires multiple doses. It is also recommended for use in children aged nine years and above who have had previous exposure to dengue and, as such, some of the most vulnerable cannot be protected with it.

So for now, prevention through sustainable reductions in Aedes mosquito densities remains the key method. The main interventions for dengue prevention are the reduction of the mosquitoes through vector control and increasing awareness in at-risk communities.

In the Asia Pacific region, the World Health Organization (WHO) is advocating a new approach to vector control, encouraging countries to move away from the previously practiced approach of reacting to dengue outbreaks with vector control because Aedes mosquitoes are transmitting multiple diseases. WHO now recommends countries adopt the new, proactive approach to routinely reduce Aedes mosquito densities in communities, irrespective of whether they are experiencing a dengue outbreak or not. They should reduce breeding opportunities for dengue mosquitoes through sustainable and environmentally-friendly methods and limit large-scale insecticide use for managing outbreaks. The new approach, while being environmentally-friendly, will also contribute to managing insecticide resistance in Aedes mosquito populations.

Regular routine vector control activities that are owned and carried out by empowered communities themselves, with guidance from Ministries of Health, will help to mitigate the challenge posed by dengue and other arboviral diseases. We know that dengue mosquitoes breed in containers, so controlling dengue is about managing where and how we store water, especially in those places where water tends to collect in and around the houses in our communities.

WHO also advocates raising community awareness on the limitations of treatment of dengue and, therefore, the need for early treatment seeking and proper diagnosis. People who are aware that there is dengue in their communities should be encouraged to get themselves tested in good time, seek early treatment and follow medical advice. This can prevent the development of severe forms of dengue.

What are the challenges involved in tackling dengue?
Dr Rabindra Romauld Abeyasinghe: The biggest challenge to tackling dengue effectively is the fact that many people who get dengue aren’t even aware of it, as they have mild symptoms or don’t show any symptoms at all. So in the case of a dengue outbreak, many people in the community are actually carrying the virus and therefore infecting mosquitoes that bite them. This situation makes controlling dengue extremely difficult because people continue to infect the mosquitoes and increase the pool of infected mosquitoes capable of transmitting the disease.

The other challenge is posed by the nature of the disease: only about 10 percent of the people infected actually experience signs of severe disease or are sick enough to interrupt their normal behaviour. People tend to travel with the virus, allowing for dengue to spread very fast within and across countries because these Aedes mosquitoes inhabit all Asia Pacific countries.

The only way to overcome this challenge is to reduce the mosquito density. This will reduce the number of people getting infected and thereby decrease the probability of the disease spreading further.

How is Malaria Consortium contributing to the fight against dengue?
Sergio Lopes: Malaria Consortium has been generating evidence on potential strategies to control dengue in Southeast Asia. There is no treatment for dengue and current treatment is solely symptomatic. Because there is no 100 percent effective vaccine at the moment, most efforts to control dengue rely on reducing the adult mosquito population to prevent infections and train health workers on case management to prevent poor health outcomes when a person gets dengue.
Malaria Consortium has been supporting research and development/adaptation of clinical guidelines for dengue in order to ensure good training to health staff managing the disease. Malaria Consortium trained 100 health workers in four townships in regions with high dengue burden in Yangon and Ayearwaddy, Myanmar. 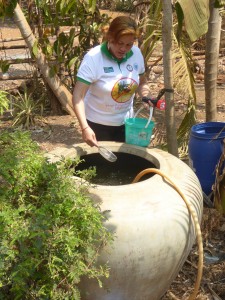 Regarding vector control, Malaria Consortium has been developing cutting edge research to find alternatives for current vector control strategies. Since mosquitoes (Aedes in particular) are quite prone to developing resistance to available insecticides, Malaria Consortium has tested biological alternatives, such as larvae eating guppy fish, that can work at scale and support an effective reduction in Aedes mosquitoes. This strategy proved to be quite successful and well-accepted by communities affected by dengue.

Malaria Consortium is continuing to investigate alternatives for dengue control and is currently starting a new trial to understand how effective the engagement of school children, parents and teachers can be in supporting vector control activities.

How does dengue management differ from malaria management?
Sergio Lopes: The main difference is related to mosquito behaviour. While the malaria mosquito (Anopheles) bites mostly during night, the dengue mosquito (Aedes) bites in the daytime. The use of long lasting insecticidal nets, one of the main tools for malaria control, therefore has limited value in dengue control. This means new control approaches need to be found, which prevent people from being bitten during the day.

Another significant difference relates to the mosquito’s preferred habitat. While Anopheles is mostly a rural mosquito, the mosquito responsible for transmitting dengue has demonstrated an increasing capacity to adapt and survive in urban environments. This makes vector control more challenging, as it requires full integration of several sectors to ensure proper vector control measures are put in place. Megacities and their peri-urban environments are the perfect place for Aedes mosquitoes to thrive since they have multiple artificial containers (gutters, sewage systems, flowers pots, etc.) which can be breeding sites, but which are difficult to target through conventional vector control measures.

Can you talk about the importance of surveillance in dengue management?
Dr Rabindra Romauld Abeyasinghe: When we talk about surveillance, we need to mention two areas: surveillance of both dengue patients and of the mosquitoes.
Surveillance of dengue patients depends on the actual screening or testing of patients to confirm the presence of dengue infection. Given the nature of this disease and the fact that is concentrated in urban areas, many people seek treatment from private practitioners or private clinics. This data doesn’t usually get captured in government surveillance systems and is an issue we need to address.

The second area relates to the surveillance of the mosquitoes: the fluctuation in mosquito density, where and when they breed is important information for implementing control activities. We need sufficient data to target the mosquito breeding sites effectively.

The recent endorsement of the Global Vector Control Response 2017-2030 at the World Health Assembly highlights the need for a clear shift in focus toward a proactive approach to controlling Aedes mosquitoes.

Can you talk about the importance of community-based initiatives?
Sergio Lopes: Regardless of the environment we are talking about (rural, urban or peri-urban), communities play a central role in fighting dengue. Informed communities who are aware of how dengue is transmitted and how it can be prevented will be more determined to participate in community-based interventions that protect their families and contribute to the wellbeing of their communities. In some places, the community is the only available resource to tackle dengue. As we proved in our recent trial with the guppy fish, communities are highly motivated and engaged in dengue control activities when they understand the interventions’ benefits.

However, the greatest benefit of community-based initiatives is that they are born within the community and owned by them. This is the first step to ensuring total ownership of dengue control strategies and ensure long-term implementation.